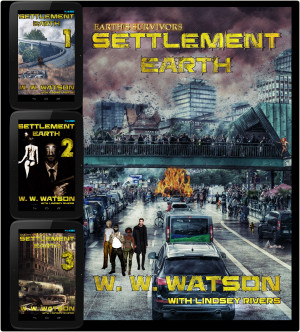 By W W Watson Lindsey Rivers
The end has come. In an effort to help, the government has destroyed most of humanity. The few survivors are on their own… Looking for others… Trying to avoid the dead… Free Previews…

Earth’s Survivors Settlement Earth: Book One by W W Watson Lindsey Rivers
Series: Earth’s Survivors Settlement Earth, Book 1. You set the price! Words: 62,850. Language: English.Published: September 22, 2013 by independAntwriters Publishing.
“It will kill you well enough,” Alice said as if reading his thoughts. “It’s a bad world. You need another shooter. Who knows what you’re going to run into between here and there.” She paused and then nodded at the pistol. “You can see I’m resourceful.” She met Johnny’s eyes when they swung suddenly up to her own. “I’m not dangerous unless someone is trying to hurt me,” she finished quietly…

Earth’s Survivors Settlement Earth: Book Two by W W Watson Lindsey Rivers
Series: Earth’s Survivors Settlement Earth, Book 2. Price: $3.99 USD. Words: 93,310. Language: English.Published: September 22, 2013 by independAntwriters Publishing.
The air lock cycled on and six soldiers stepped into the hall like space that was actually just an airlock between the control room, the autopsy room, the former patient ward and the outside world. Johns tensed, waiting for the door to their space to cycle on, but it didn’t. “You think they will outright kill us,” Kohlson asked after a few long minutes of silence. “Gabe… I think they will…”

Earth’s Survivors Settlement Earth: Book Three by W W Watson Lindsey Rivers
Series: Earth’s Survivors Settlement Earth, Book 3. Price: $3.99 USD. Words: 89,390. Language: English.Published: September 22, 2013 by independAntwriters Publishing.
A thin line of blood ran away from the wrist that had been encircled by the tie. Whether from the sharp metal she had used to escape the zip-tie, or the zip-tie itself she could not tell. A few more seconds of careful rubbing with the sharp metal edge and the other plastic cuff fell to the floor. She stood and rubbed feeling back into her hands…

You may have missed